If you’d like a larger view of any of the four photos — just click on the photo!

Photo 1: The notation that accompanies this cheerful lady’s photo simply states the photo is from The Drake Family circa 1900. (LHPA 75-0204) Does anyone know who the lady is and which building she is standing in front of?

Photo 2: This photo is noted as being of the Corning Fire Dept. Northside Station (LHPA 75-0393). Does anyone know where this building was, or is, and who the men are in the photo?

Photo 3: This photo is noted to be of Market Street in Corning; however, the exact year is a mystery and which cross street is the closest Pine or wall perhaps…. (LHPA 75-0369)

Photo 4: The record we have for this photo simply say it is a “Drake Family” photo — does anyone recognize the tower of the building seen behind the frosty trees? (LHPA 75-207) 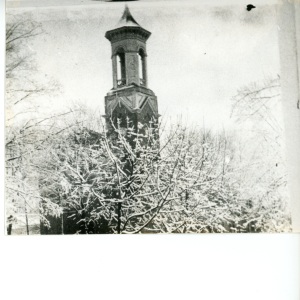